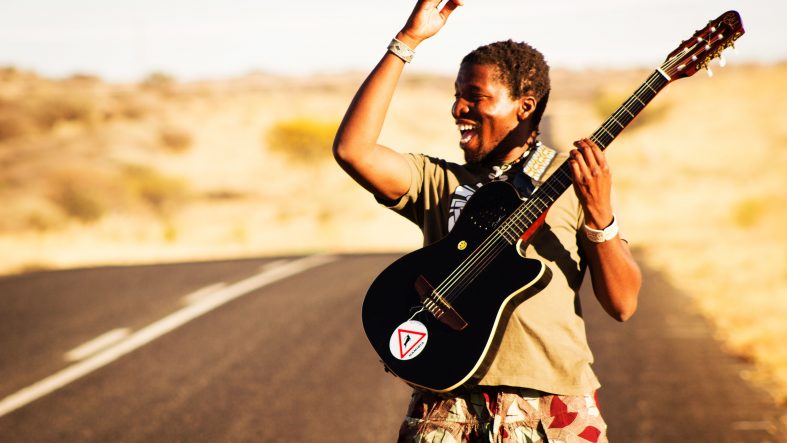 On Saturday, August 5 at 7:00 p.m., we will have contemporary African music brought from Namibia by Elemotho in the Jardin de l’Albarda.

Elemotho will play the acoustic guitar and sing in his mother tongue setswana, English and other Namibian languages. From the rural boy to the modern lyricist of today, Elemotho will transport us through his commercial sounds by his particular vision of the music: “I grew up with the narration around the fire”.

Elemotho will delight us with his old and new sounds and with his powerful spirit will embark us on a journey: “that musically invokes the spirit of the Kalahari.” Elemotho Gaalelekwee Richardo Mosimane, is a composer and singer born in Gobabis, Namibia, who after his studies of philosophy and psychology decided to dedicate himself to music.

He achieved recognition in countries such as France – where he won the RFI discoveries 2012 Award – Germany and Austria. His performance in Womad in 2014, accompanied by his band before the presence of thousands of spectators was an important moment of his career. In 2016, two of their songs Neo and La Vida, are selected by Netflix for the series Grace & Frankie in its second season.

In Spain he has performed in festivals like the Territories of Seville, Summer of the Villa of Madrid and Festival Three Cultures of Murcia. Elemotho is accompanied by guitarist Samuel Bathol, originally from Congo-Brazzavile. Elemotho has also collaborated with Spanish musicians like Los Delinquentes and the duo Fetén Fetén.

He writes and composes his own songs, using different languages, such as English, Setswana – his mother tongue – or damara-nama; His lyrics have an important social content, and reflect the attitude of commitment to his land, although his musical discourse is global. Their musical style can be included in the calls “musics of the world”, in some occasions closer to the folk, and also with slight influences of the jazz; And always based on rhythms of African percussion.